Skip to content
Previous Next
Life To The Full

‘Life to the Full’
Creation of a School Mural

At the beginning of the school year we were tasked with designing and creating a mural for the hall based around the school Bible verse – Jesus said “I have come that they may have life and have it to the full”. It was a very open brief. What style should it be? What should it feature? How could we best represent the verse? The key lay with the students themselves after all, they would be the ones looking at it each day during assembly time. We put together a few otions in terms of style and held a focus group with students from various year groups. It soon became clear that a doodle/graffiti/cartoon style was most popular amongst the students and so this set the tone for the design. But what about the content? What would be relevant and interesting to the students? Again, it had to come from the students themselves and so Mrs Chapman, our Creative Technician, led an assembly asking students and form groups to submit their ideas as to the type of things they would like to see in the design and would represent ‘living life to the full’ to them. The response was wonderful with doodles, sketches, ideas, words, and themes all being submitting across the forms and year groups. The challenge was on to pull all these ideas and drawings together into one cohesive design. Eventually the artwork was created and sent to the printers for printing onto specialist ‘wallpaper’. Mrs Chapman share with us the nervous wait for the final print to be delivered to school and the emotions of seeing the final design going up on the hall wall…..

“I was incredibly nervous as i hit the send button on the order and the artwork zipped its way to the printers. What if i had made a mistake or spelt something wrong? What if it just didnt look right – objects were too big or too small? Its very hard creating artwork on a small screen that will be blown up to 8 metres long! What if i had got the dimensions wrong and it didn’t fit? The day finally came when myself and Mr Broomhead were to put the mural up. As we rolled out all the individual pieces of wallpaper (there were a lot of them!) the task seemed daunting to say the least. But as the first few pieces went up i felt two emotions: overwhelming relief – phew, it was going to be okay – and excitement. Already we could see that the mural was going to look amazing and we couldnt help a bubbling up of excitement as each piece of wallpaper was added. It was a slow process working at height with the scaffolding tower. It was particularly important that we made sure each piece was straight and lined up perfectly. A small error at the beginning would be magnified by the end! Finally, after 7hrs of work the mural was finished. We stood back and smiled. The whole process, from the inital spark of ideas to the finished installed mural, had taken a whole academic year but all the hard work had been worth it. We now have a fantastic piece of artwork that reflects the ideas of the students and the ethos of the school as a whole for everyone to see. There are so many elements within the design, i see new things every time i look at it. I hope that our current students and those of the future will be inspired by the words and themes and never tire of looking up and seeing what it means to live ‘life to the full’.” 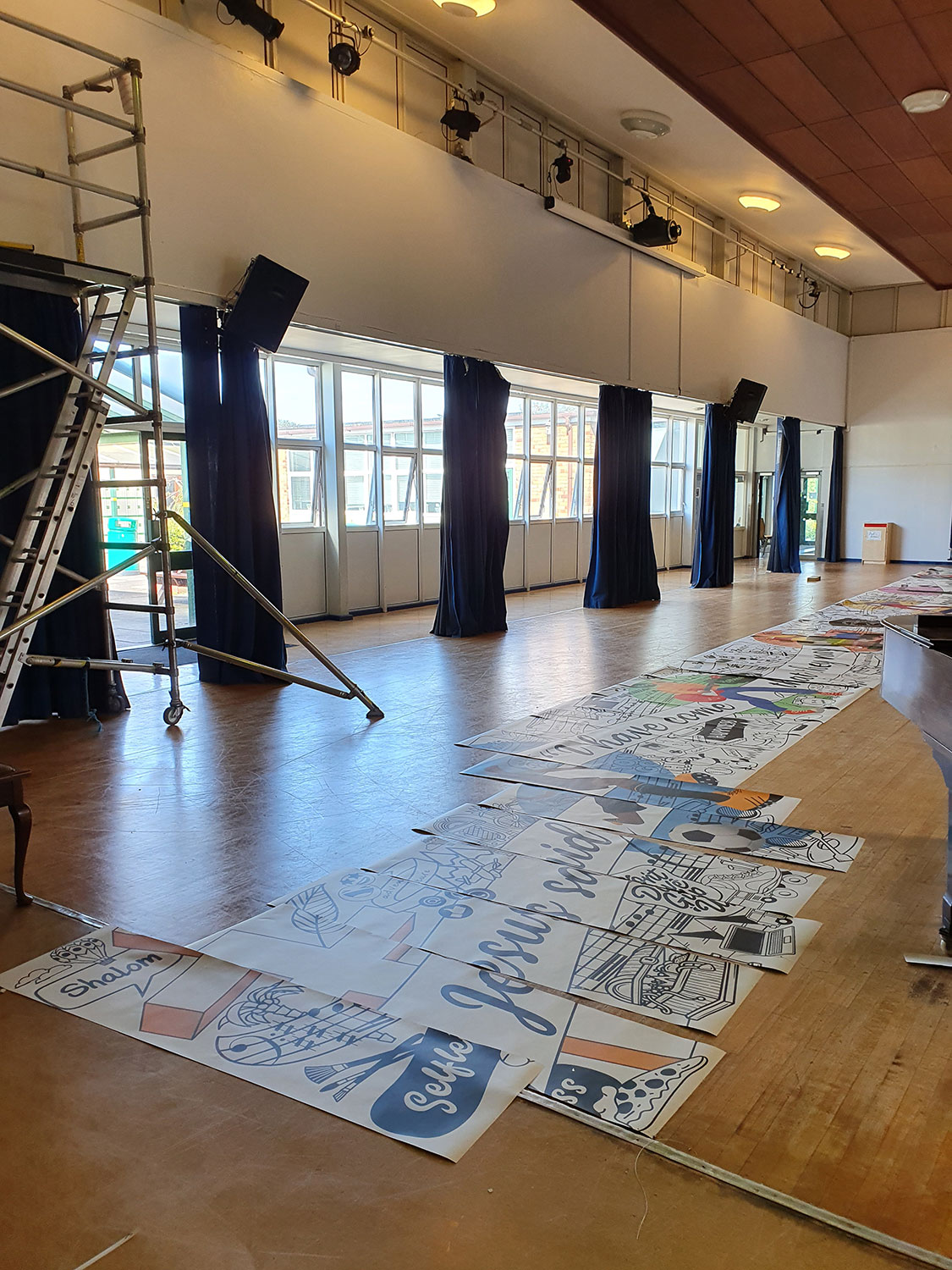 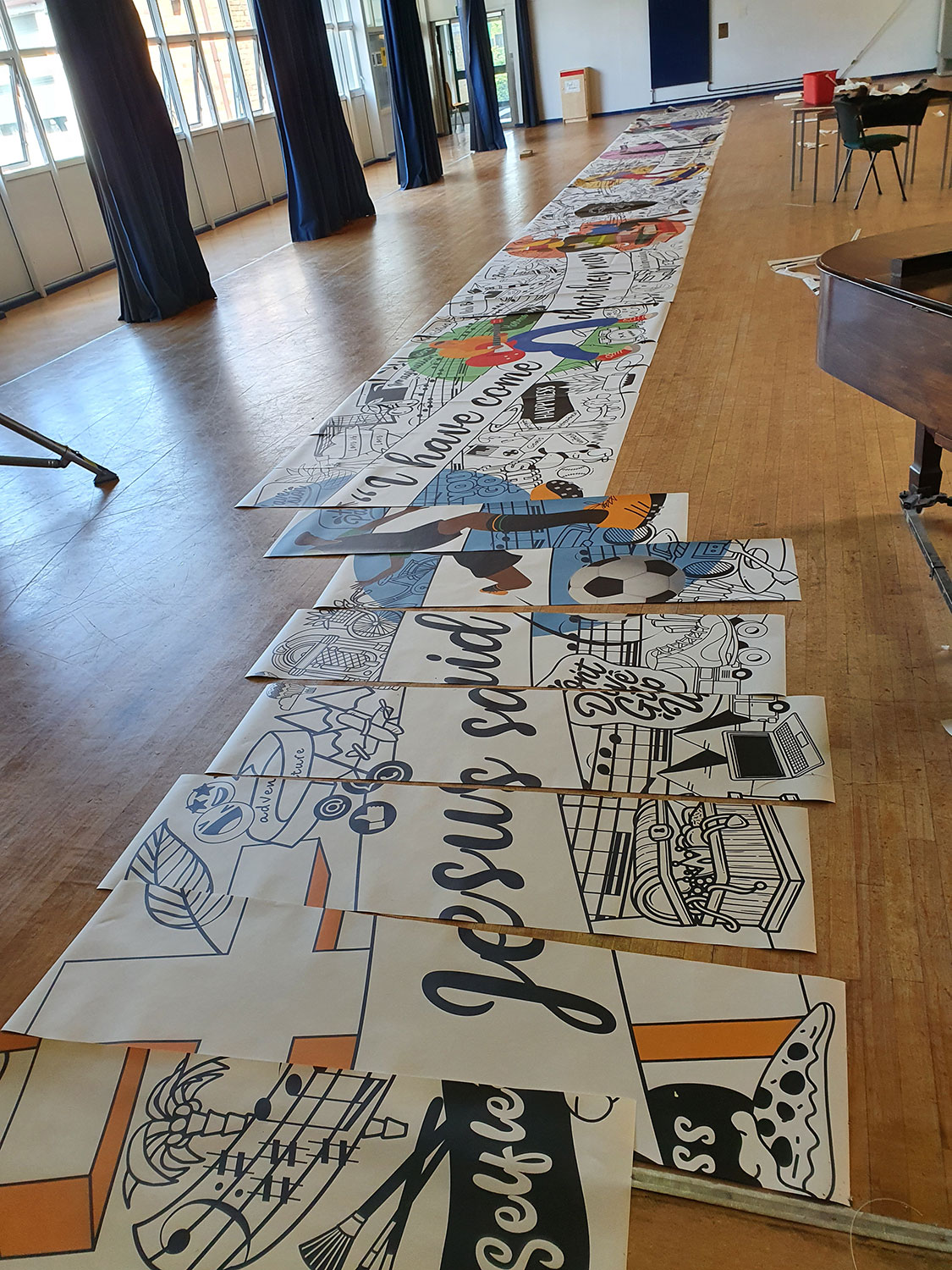 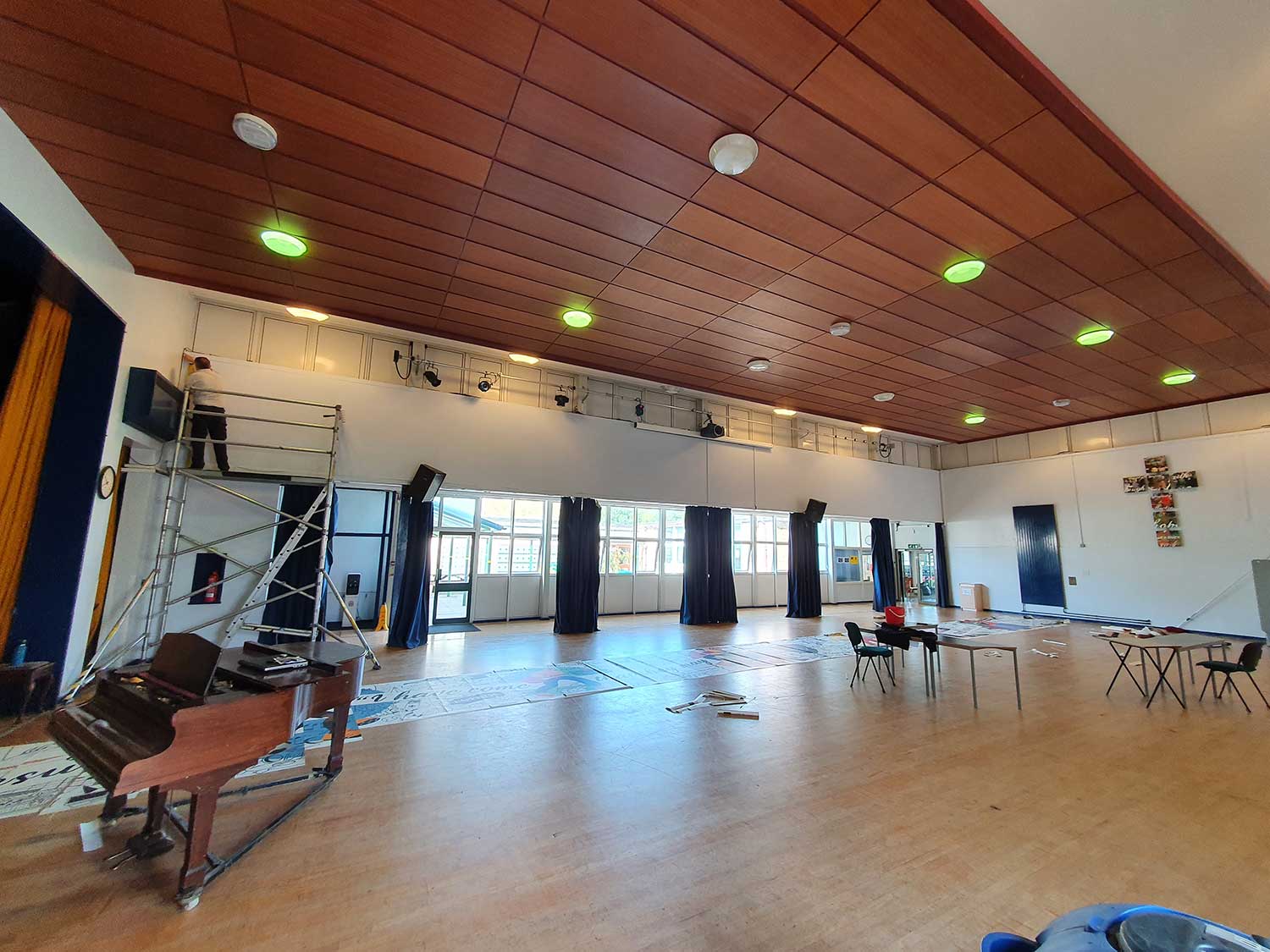 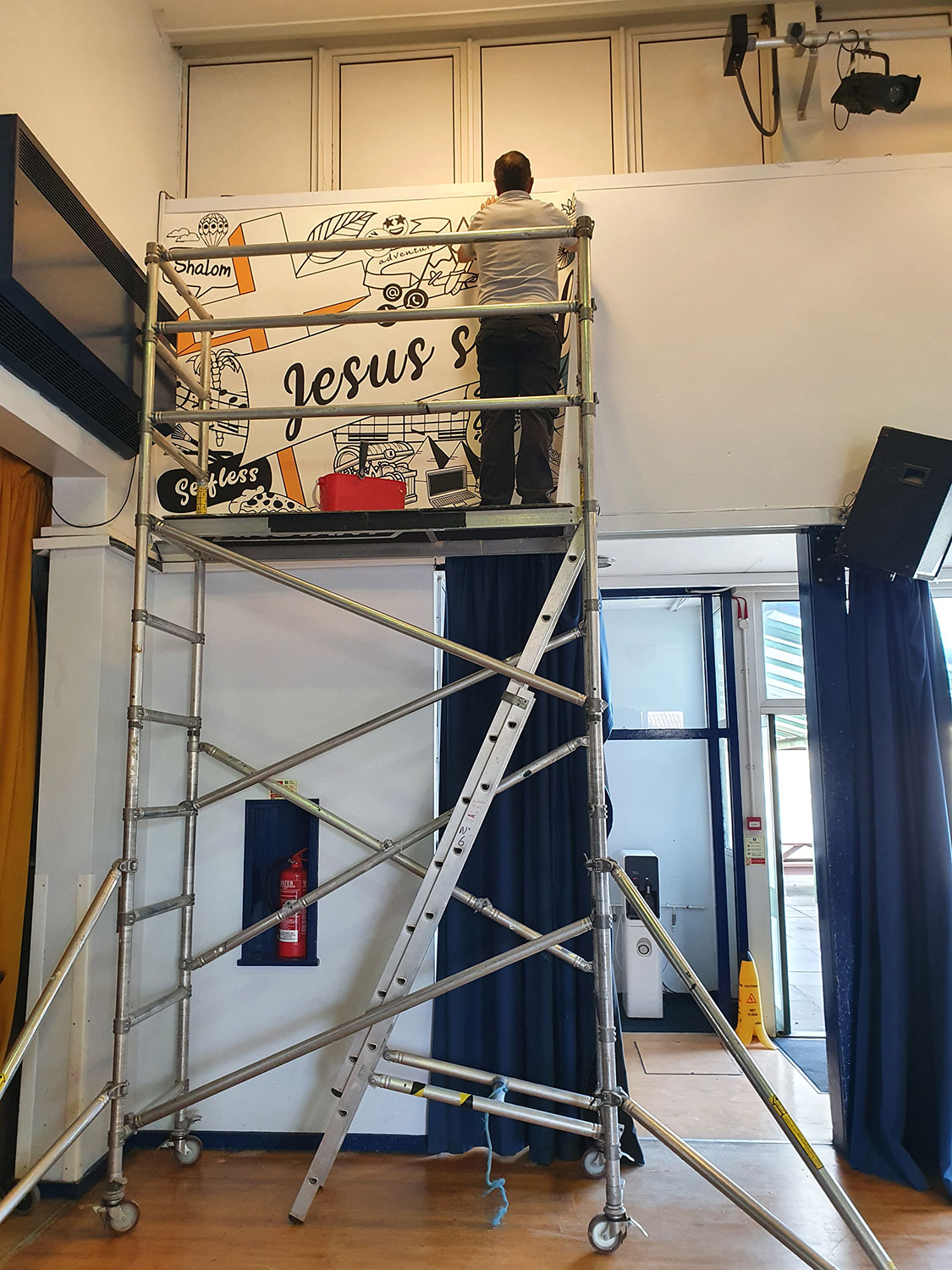 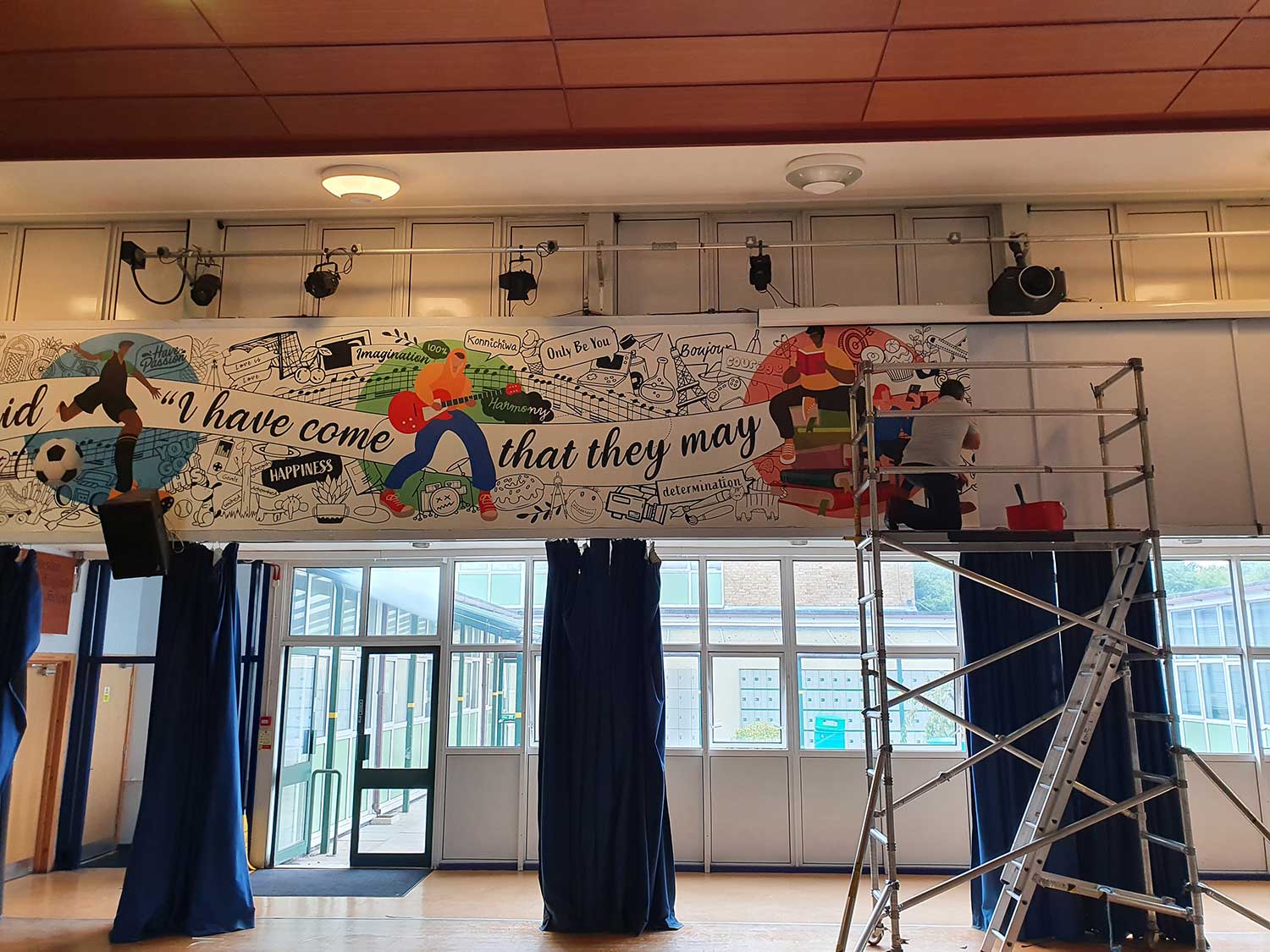 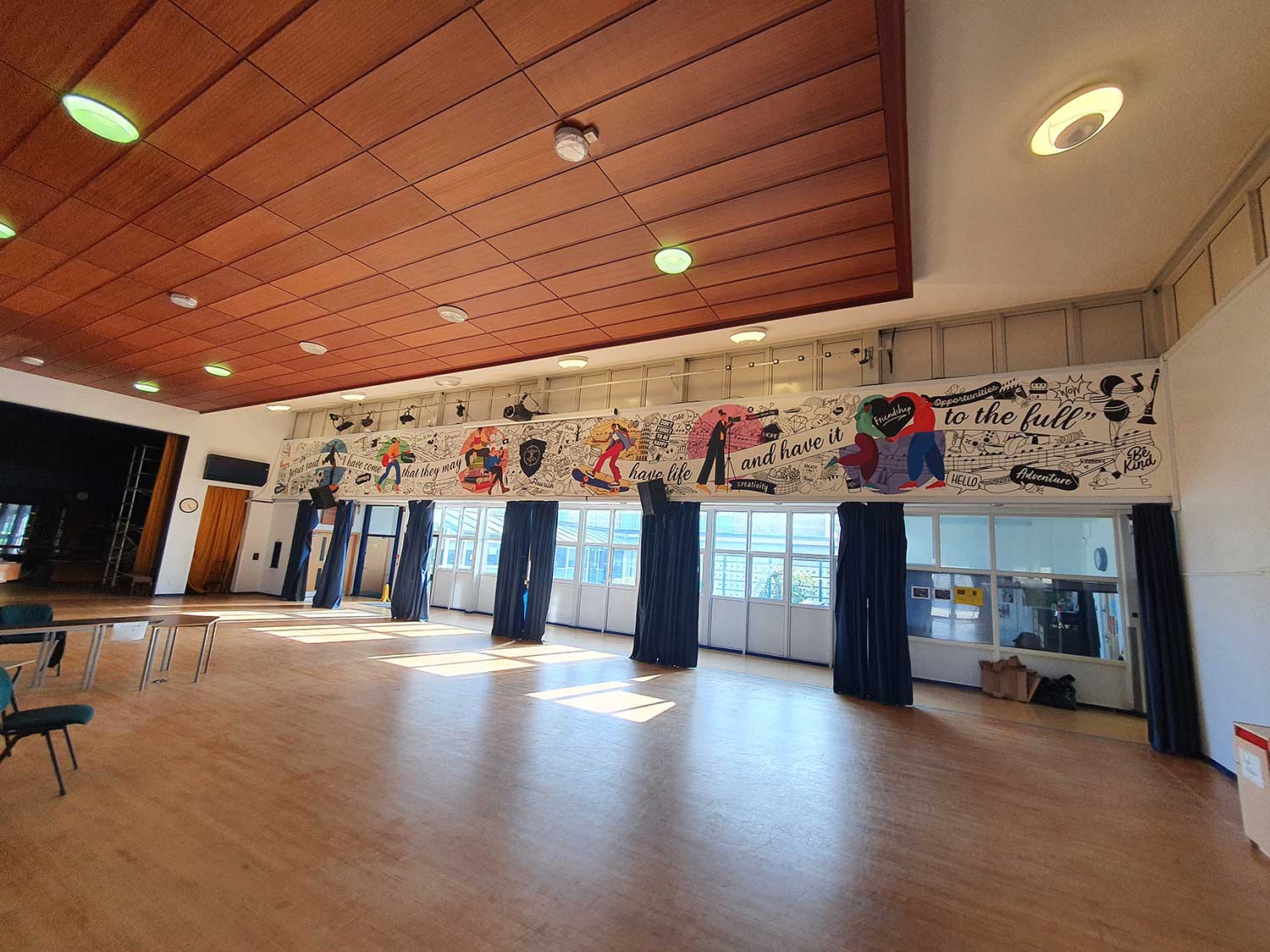 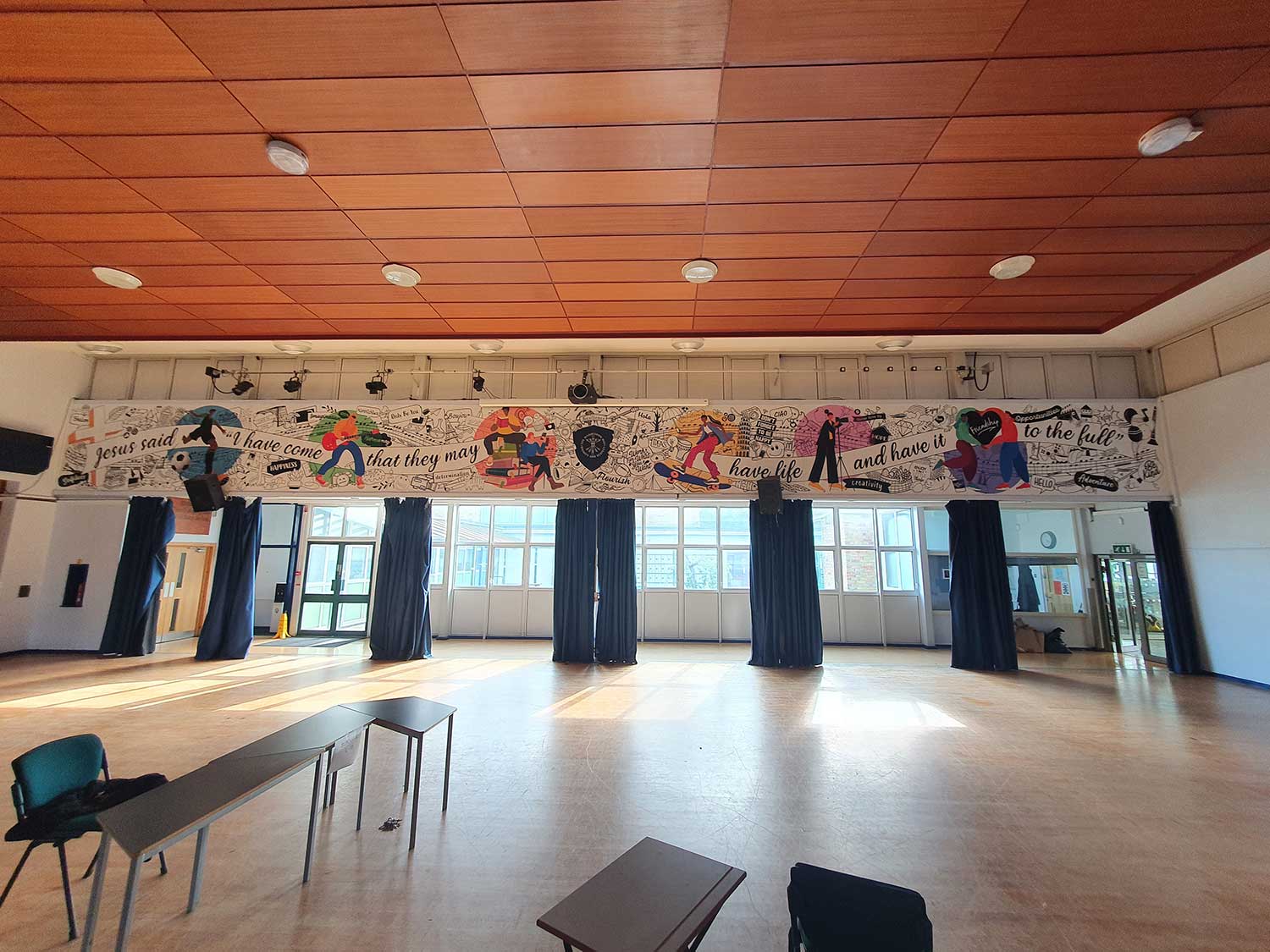